Americans with Disabilities (ADA) Transition Plan Task Force was established in 2020 to create a framework for the establishment an ADA Transition Plan for the City of Lakewood.  Lakewood is required by law is to have an ADA Transition Plan in place for the upgrade and compliance of city properties and facilities including but not limited to buildings, signage, website, sidewalks, curbs, crosswalks and pedestrian signals.

The ADA Transition Plan Task Force shall be composed of seven members, three of whom shall be appointed by City Council and four of whom shall be appointed by the Mayor. The appointees shall have no formal term and may select a chairperson from among them. Council may appoint a representative from among councilmembers to attend task force meetings as a non-voting member, and in that event Council’s representative shall report to Council following each public meeting of the task force. The Mayor or any designee of her choosing shall serve as a non-voting member. 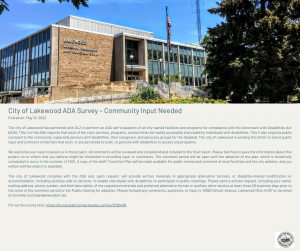