The City of Lakewood provided an update on several capital investments being installed this year at Madison Park. The improvements come as a result of conversations between the Mayor’s office, City Council and Lakewood residents regarding park priorities, including concerns over how to ensure that Madison Park – Lakewood’s second largest city-owned park – has the resources and amenities it needs to serve the city’s southeastern neighborhoods.

“I’m very excited about the investments the City is making at Madison Park, and the fact that we were able to quickly and creatively meet many of the community’s immediate goals,” said Mayor Meghan George. “I make it a point to listen to what our residents and taxpayers see as key priorities. This year, people have made it clear that additional resources were needed at Madison Park as soon as possible. I was able to work with my directors and our city team to find and repurpose resources and move quickly to implement those improvements to the park this year while we develop a future long term strategic plan for the rest of the park.” 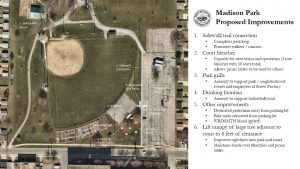 In August, City crews will install a new connector path to complete a parkwide loop, and also complete water and sewer line work and the pouring of new concrete pads. This initial work will be followed by the introduction of basketball court bleachers, a drinking fountain, a bike rack, and barbeque grills. These items will be installed this year, with timing dependent on staggered delivery from merchants and contractors. The improvements are also being paired with enhanced programming at Madison Park, including a youth mentoring program developed in partnership with the Lakewood Outdoor Basketball Committee.

Mayor George noted that the City was able to move quickly to make the Madison Park improvements happen, despite the challenges of budgeting, scheduling, and the current difficulties obtaining labor and materials in the market. “None of these capital costs were in our original 2021 parks budget or were expected as part of our ongoing maintenance and improvement calendar at our parks this year,” said Mayor George. “Through our community conversations, new needs were discovered, and it became clear that this had to be a top priority for 2021. My administration was able to be creative, and dedicate dollars left over from other projects that came in under budget. Although not originally on the radar for 2021, we still were able to make this project happen while living up to our commitment to fiscal responsibility and high quality amenities for our residents.”

The quick action was a result of city staff efforts and community involvement. “I want to thank our team at the City for their hard work and dedication to making the most of our limited taxpayer dollars while introducing more high quality amenities to our parks,” said Mayor George. “I also want to send a big thank you to the members of the community who contributed, including the Friends of Madison Park, the Lakewood Outdoor Basketball Committee, and the Madison Court Block Party. Lakewood residents are deeply committed, and this project benefitted immensely from community input and engagement.”