​ Firefighter/Paramedics Petty, Helbig, and Starcovic are the three newest members to join the Lakewood Fire Department | The City of Lakewood, Ohio

Firefighter/Paramedics Petty, Helbig, and Starcovic are the three newest members to join the Lakewood Fire Department 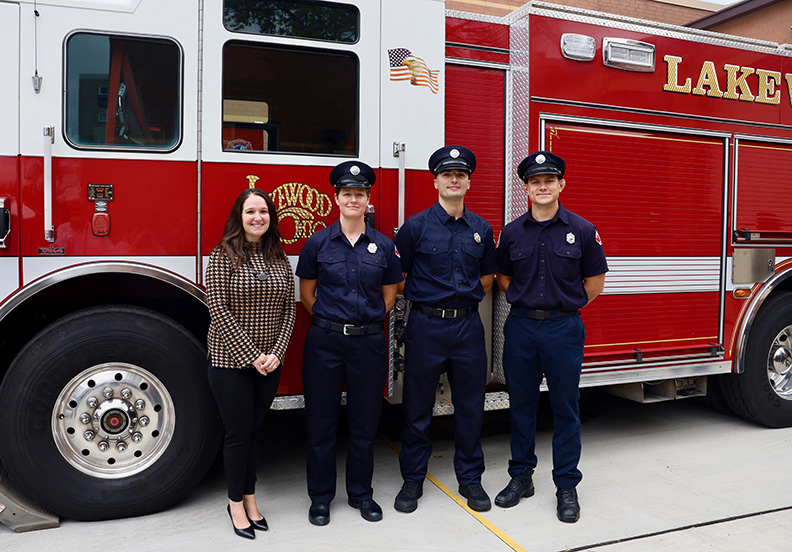 Kimberly “Kim” Petty was born in Orrville, Ohio and grew up knowing that she wanted to help people. Her interest in becoming a firefighter developed after she earned a degree in exercise physiology at Ohio University. The desire to provide patient care led her to completing an EMT and Paramedic training program at Cuyahoga Community College (Tri-C). Wanting to add to her skill set, she enrolled in Tri-C’s Fire Training Academy where she became president of her class and valedictorian runner-up.  Kim Petty is Lakewood Fire Department’s first-ever female firefighter/paramedic.

Aaron Helbig was born and raised in Lakewood, attended Lakewood City Schools, and graduated from the University of Cincinnati where he studied economics and earned an international business degree. Hearing from friends that firefighting is the best job in the world intrigued him to enroll in Cuyahoga Community College’s Fire Training Academy. While attending the academy, Aaron worked at Sarita which offered him a flexible schedule. Helbig took the firefighter/paramedic job in Lakewood to give back to his community in a meaningful way. He is following in the footsteps of two uncles Dennis and Jimmy Helbig, retired Captains of the Lakewood Fire Department.

Pat Starcovic, born and raised in Strongsville, has been ready for a career in firefighting since high school. During his junior and senior year, he earned his firefighter certification as well as EMT Basic. He went on to become a certified paramedic and then continued his adult learning at Cuyahoga Community College in the nursing program where he became a registered nurse (RN); a license he still holds today.  Starcovic worked as a firefighter/paramedic in another city for seven years. Hearing about the culture of the Lakewood Fire Department being great and forward-thinking and knowing that there is room for advancement drew him to work for the City of Lakewood. He and his wife Cara are proud parents of a 15-month old daughter named Reagan.

A warm Lakewood welcome to these firefighter/paramedics.